Skip to content
The Old Course The New Course
The Old Course
The Bright Golf Club was formed in 1909 by a group of astute businessmen. The earliest records are from the annual meeting held at the Alpine Hotel on April 25, 1910. Mr. MGG Fox was elected President; Vice President was Dr. LJ Kidd; and Secretary, Mr. J Robertson. These were the same office-bearers when the club was formed. Membership fees were, Gentlemen 10/6; Ladies 5/-. In the minutes a motion of thanks was passed to property owners on whose land in Quinn's Gap Road (now known as Mt Porepunkah Road) the course was situated. 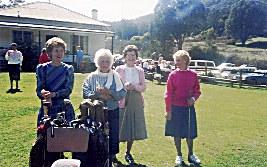 On the club's 50th anniversary in 1960 it is interesting to note Dr. LJ Kidd the original Vice President, resided in Melbourne and still conducted his practice in Collins Street. The well known name around Bright of Masciorini first appears in the minutes in 1911. Mr. AFA Masciorini was Secretary of the club from 1918 to 1933. He was Club Champion in 1911 and on many occasions afterwards. 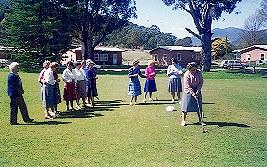 The club continued to play on private properties until July 12, 1937 when 35 acres of land were purchased, the remainder of the course was still being used by courtesy of the Sharps and Mannings families, who had been members since the formation of the club. In September 1950, a further 50 acres were purchased from the Mannings and the club now had 14 holes on its own property with the remaining 4 on private land. In 1956 the number of holes were reduced to 14 when the private land was used for building. 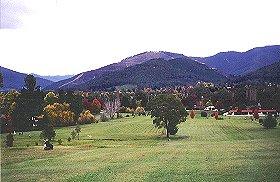 The course of 14 holes had many running up the side of steep hills. Some members said it was so steep they had one leg longer than the other!! During the winter as the sun did not shine on some greens they remained covered with frost all day. In 1960, as in most country clubs with small membership, volunteers through working bees, carried out most of the work on the course. The fairways were kept mowed throughout the year, sand greens being used as the course was very hilly and finances did not permit the up keep of grass greens.

The original clubrooms consisted merely of large sheds moved to various situations as time went on. It was not until 1953 that a house owned by the club, was converted to a clubhouse that had all amenities and was a great asset to the social life and comfort of the members.

By 1960, the membership fees had risen to Members £4/4/- and Associates £2/12/-. On April 16, 1960 the club celebrated its 50th anniversary with a 12 hole Stableford competition which was won by F Cummins for Latrobe 25 points, closely followed by M Thomson (brother of famous Peter), with 23 points. 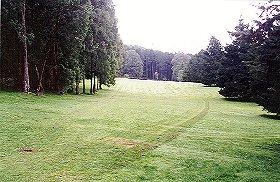 In the evening, a social was held, attended by a very large crowd that taxed the capacity of the clubhouse and proved an enjoyable function.

As the years moved on and the age of the members also advanced, the geographic terrain of the course became more difficult for the average member. In 1983, after a devastating fire destroyed a pine plantation on the Back Porepunkah Road the President of the day, Ron Cherry, was prompted to begin what became a long process, to acquire sufficient generally flat land on which a new 18 hole course could be built.

The New Course
The new 18 hole course, located on Back Porepunkah Road was opened on May 6, 1989, is generally flat to undulating and covers over 50 hectares. At this time the club become known as Bright Country Golf Club.
Before the gold dredges turned the soil upside down in the early 1900's the site was a walnut grove known as "Robinette Farm". The farm was in the vicinity of the current 13th fairway. After the dredges had destroyed the top soil the site is believed to have been planted with wattles to be used for tannin processing in Beechworth. In 1922, after the dredges had done there work the site was planted with Pinus Radiata and a few Californian Redwoods (Sequoia Sempervirens) The radiata pines were harvested and replanted again in 1962.
On November 24, 1982 a wild fire destroyed the pine plantation.
Fortunately a couple of the Sequoia survived thanks to the quick thinking of a few local fire fighters. (The Club's logo now depicts one of the remaining specimens that stands next to the Club House with a height of 47.4 metres and still growing) The fire was so intense it became a major threat to the township of Bright. To reduce this risk the authorities decided a green belt was needed to provide protection from any future threat. 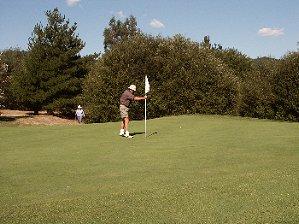 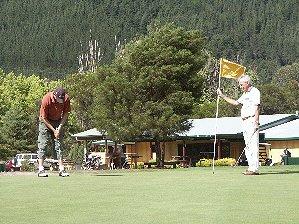 In 1983 negotiations began with the government department controlling the pine plantations. This proved to be a long drawn out process, as the regulations of the day would not allow any crown land to be converted to private ownership. A means had to be found to overcome this constraint. Through contacts in the Plantations Dept, Ron Cherry learnt of a parcel of land a-joining an existing plantation in the Tallangatta Valley that may be purchased and a Title Exchange completed. This would allow the Golf Club to be relocated to a 50 acre site on the Back Porepunkah Road providing the green belt protection for the town and to expand to an 18 hole course. 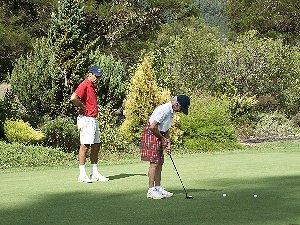 Initial earthworks began in 1984 to determine the viability of the site, as little topsoil was evident to sustain growth of an adequate grass cover. After the Title Exchange was completed in 1987 construction began in earnest. The Minister for Sport & Recreation, Mr. Neil Trezise opened the first 9 holes on May 6, 1989. An additional 3 holes were completed in 1991 with the final 6 in 1992.
Through the foresight and determination of a few members, in particular Ron Cherry, and the vision of the course designer Tony Cashmore, a magnificent course was born. 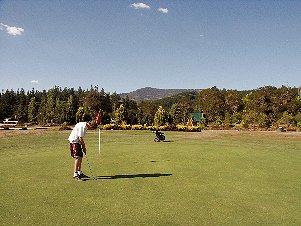 Today, the Bright Country Golf Club is not only one of the states oldest golf clubs, it is also considered to be one of Victoria's best regional courses and each year continues to expand its reputation for providing a challenging yet enjoyable layout. The course is nestled beside the Ovens River and provides breathtaking views in spring; summer & autumn of pine covered hills and in winter of the surrounding snow covered mountains. At the conclusion of the Victorian Senior Amateur Championships hosted at Bright in October 2002, the VGA President, Mr. Dick Kirby, paid compliment to the Club for presenting the course in an immaculate condition.

The Golf Shop & Course are open 7 days a week for anyone to take up the challenge and enjoy the magnificent alpine setting.